Surveying ICT use in education in Central and West Asia 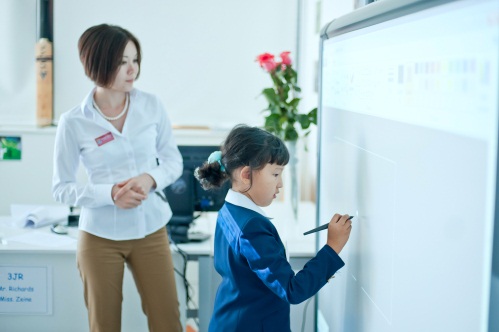 Technology use in schools at reasonably large scale began in many OECD countries in earnest in the 1980s and then accelerated greatly in the 1990s, as the Internet and falling hardware prices helped convince education policymakers that the time was right to make large investments in ICTs. In most middle and low income countries, these processes began a little later, and have (until recently) proceeded more slowly.

As a result, it was only about ten years ago, as education systems began to adopt and use ICTs in significant amounts (or planned to do so), that efforts to catalog and analyze what was happening in these sets of countries began in earnest. UNESCO-Bangkok’s Meta-survey on the Use of Technologies in Education in Asia and the Pacific, published in 2003, was the first notable effort in this regard. A trio of subsequent efforts supported by infoDev (Africa in 2007; the Caribbean in 2009; and South Asia in 2010) helped to map out for the first time what was happening in other regions of the world related to the use of ICTs in education. While the information in such regional reports can rather quickly become dated in some cases, given the pace of technological change, they still provide useful points of departure for further inquiry. In some other parts of the world, even less has been published and made available for global audiences about how ICTs are being used in education.

Information about developments in many of the countries of the Soviet Union, for example, has not, for the most part, been widely disseminated outside the region (indeed, for many within the region as well!). The Moscow-based UNESCO Institute for Information Technologies in Education (IITE) has been perhaps the best ‘one-stop shop’ for information about ICT use in the region. Recent work by the Asian Development Bank has gone much further to help to fill in one of the most apparent ‘blind spots’ in our collective global understanding of how countries are using ICTs to help meet a variety of objectives within their formal education systems. ICT in Education in Central and West Asia [executive summary, PDF] summarizes research conducted over five years (2006-2011) in Azerbaijan, Kazakhstan, the Kyrgyz Republic, Tajikistan, and Uzbekistan, with shorter studies on Afghanistan, Armenia, Georgia, and Pakistan.

Some key findings from this work:

[-] While the importance of ICT in education has been recognized widely, it is still in its infancy in most of the region and its role and impact have yet to be fully determined or realized. [-] While all the participating countries consider effective teacher training in ICT skills to be among the key determining factors in its effective ICT use, most are not providing sufficient training to use ICT to best effect. [-] There is an urgent need for governments to adequately fund school ICT operational costs.

Interesting conclusions, you might say to yourself, but not all that different in what has been happening in many places in the world. Especially so, when you consider that the report identifies “an emphasis in most systems on hardware provision — amid the unfortunate but widespread assumption that provision of the hardware by itself is the solution to a range of educational problems”. (Longtime readers of the EduTech blog may here echoes of what we have more generally labeled the ‘classic example of worst practice’ in ICT use in education: Dump hardware in schools, hope for magic to happen.)

That said, and like other regions, there is a wide range of both intention, ambition, and implementation across this set of countries. Compare, for example, Kazakhstan, where all schools are connected to the Internet, interactive whiteboards are in common use, and lots of digital learning materials are available, with a place like Tajikistan, where ICT use in education is still in the early stages, with targeted investments at a few grade levels — primarily in support of an ‘informatics’ (i.e. computer literacy) curriculum. (Side note: Reading the report, one gets the impression that the specter of ‘informatics’ has cast a heavy and often determining shadow over investments in computers in schools across the region, which in many cases have been closely linked with efforts to expand access to informatics courses — typically within the confines of school computer labs. This is, to my knowledge, not unlike how things have developed in other regions of the world, but the impression this survey leaves on me is that this influence is comparatively stronger in this region than in most others.) Technical support and maintenance is a problem in many places: Almost a third of computers in Kyrghyz schools, for example, weren’t working when survey work there took place.

The ADB study finds “a remarkable unanimity in the identified constraints on ICT development and effective use in basic education”, with challenges related ‘divides’ of various sorts (between rich and poor, for example, between urban and rural); inadequate school infrastructure (including power supplies) and gaps in so-called last mile connectivity; insufficient teacher training (compounded by lack of sufficient attention to how to motivate and support older teachers in their use of new technologies); and lack of digital materials in local languages. Not surprisingly, funding is often stretched quite thin. Core components of the educational landscape (curriculum, assessment mechanisms, etc.) have remained largely the same, and so have not been modified to take advantage of some of the affordances offered by the introduction of ICTs. Studies on the impact and effectiveness of ICT use in education remain few and far between, in part due to a lack of adequate mechanisms and funding to support such activities.

For most people not working in these places, I suspect the good (and short) executive summary [pdf] will provide a sufficient general overview of what has been happening.

Those with more detailed interests — especially about country-level activities — are directed to the full (337 page) report, ICT in Education in Central and West Asia: A Work in Progress, which (obviously, given its length) goes into much greater detail. [Here’s the link to where you can, very slowly, download the PDF.] In addition to more substantive analyses of specific issues across countries, drawing on lessons from other parts of the world in certain circumstances, the publication includes a set of ‘ICT in Education Country Reports’ for Azerbaijan; Kazakhstan; the Kyrgyz Republic; Tajikistan; and Uzbekistan, as well as a shorter series of ‘ICT Rapid Assessments’ for Afghanistan; Armenia; Georgia; and Pakistan. Here you can find useful updates of many of the ICT/education country reports that appeared in the original UNESCO ‘meta-survey’ of 2003, as well as complements to the country reports for Afghanistan and Pakistan which are available in the infoDev regional survey of South Asia.

As with other regional surveys of this sort, some of the most interesting stuff is in the details of the individual country reports. Just one quick example: I was interested (and heartened) to see the apparent priority that Kazakhstan has given to ICT use to support the education of students with special educational needs. This is an area where the potential for ICT use to help meet goals that call for ‘learning for all’ is quite clear and compelling around the world and where (unlike many other aspects of the ICT use in education) there is a compelling evidence base to support investments that can make tangible, measurable impacts on student outcomes. This is not to say that Kazakhstan would appear to be a ‘model’ in this regard — the report notes that “computer/student ratio in special needs schools was 1:22 in 2010, which was only slightly less than the general secondary figure of 1:18”. Plausible arguments could be advanced that goals of parity in such things are only a starting point, given the outsized impact that ICTs can have on educational opportunities for special needs students. Rather, it is to note that Kazakhstan would appear to be doing more in this area than many of its neighbors — and similar countries around the world (even if ‘more’ is still felt by some to be ‘insufficient’). Might there be lessons in this regard from Kazakhstan for other countries around the world who are beginning to place greater priority on special needs education, and the potential role that ICT can play? Perhaps. A close reading of the country reports may unearth dozens of other examples where opportunities for learning and knowledge sharing around specific topics or issues might be worth exploring.

The Asian Development Bank’s work to survey ICT use in education in Central and West Asia helps fill an important gap in our collective global knowledgebase. For those interested in tracking developments across the globe in this area, it is an invaluable resource, pointing to issues and activities, initiatives and policies of potential relevance to scores of other middle and low income countries. For those working in, or considering working in, these specific countries, it contains a wealth of information and will most likely remain, for the immediate future, the best source of detailed data and insights about how countries in this diverse region are exploring the use of new technologies to help meet their educational and developmental objectives.

Note: The image used at the top of this blog post of a student in Kazakhstan doing some work on an interactive whiteboard under the watchful guidance of her teacher (“A is for Astana …”) comes from the Wikipedian Kryukov via Wikimedia Commons and is used according to the terms of its Creative Commons Attribution-Share Alike 3.0 Unported license.