The State of Telecoms and Internet in Afghanistan at a Glance

Despite the phenomenal growth and progress of its telecom sector, Afghanistan still remains a mainly consumer country for most of these technologies and services, while the fluctuating security status and the ongoing insurgency are the biggest hurdles for the provision of universal access to these services in the country.

Just eleven years ago Afghanistan had a barely functional post-war telecom infrastructure and no services. Afghans had to travel to neighboring countries to make a phone call. Since its evolution into relative modernity starting April 2002, the telecom sector in Afghanistan has witnessed an unprecedented and phenomenal growth, commencing with the first private telecom company’s—Afghan Wireless Communications Company (AWCC)—authorization to provide mobile (GSM) services.
With progress and development in all four dimensions including infrastructure, services, policy and regulatory framework, telecom is one of the biggest revenue generating sectors in Afghanistan with over 160 million USD in average annual revenues, accounting for more than 12% of total government revenues, according to the Afghan Ministry of Finance. Despite numerous challenges, namely the deteriorating security situation in the country, the telecom sector has been able to attract over 2 billion USD in private investment and has generated more than 110,000 direct and indirect employment opportunities throughout the country.

With service coverage to more than 88% of the country’s total population and over 72% population penetration, telecom services (mostly mobile) are now available in all 34 provincial capitals and most of the principal cities including Kabul, Herat, Jalalabad, Kandahar and Mazar. These services are also available along all major highways and main road systems across the country while rural access to telecom services is set as the top priority for the sector and is quickly expanding.

This sector was spurred on by the expansion of mobile (GSM) services. As of March 2013 there are more than 19 million mobile subscribers compared to only 20,000 at the end of 2002. Including the fixed line state carrier Afghan-Telecom, the local fixed-line service provider (LFSP) Wasel-Telecom and four mobile (GSM/3G) operators AWCC, Roshan, MTN and Etisalat, there are a total of six active telecom carriers providing a wide range of services ranging from fixed line and wireless fixed line (CDMA) voice and data services to mobile GSM/3G voice, SMS and GPRS data services.

Building an adequate country-wide telecom infrastructure is the foremost requirement for the growth and expansion of the telecom services and has been a top priority for the sector since 2002. Telecom infrastructure accounts for the majority of the 2 billion USD in investment, and major infrastructure development projects include the establishment of the mostly mobile (3G/GSM) operator, a sponsored country-wide microwave network of more than 5,119 telecom base stations (BTS sites) as the main backbone for mobile (GMS/3G) services and wireless connectivity, and the ongoing implementation of the 130 million USD World Bank and Afghan Government funded 4810 km national fibre-optic backbone project connecting more than 23 provincial capitals, several principal cities (including Kabul, Herat, Jalalabad, Kandahar and Mazar), as well as connecting Afghanistan to Iran, Pakistan, Tajikistan, Turkmenistan and Uzbekistan. Just over 3,000 km of the total 3300 km of the first phase of this project along the country’s main road system has been completed, as well as more than 60% of the ring connecting to neighbouring Iran, Pakistan, Tajikistan and Uzbekistan. 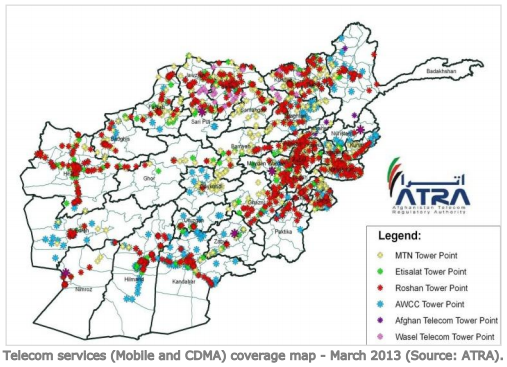 There are an estimated 3 million internet users as of mid-2013, accommodated by 51 licensed Internet Service Providers (ISPs) in the country (including the four GSM operators and the 2 fixed line carriers Afghan-Telecom and Wasel). While most of these ISPs are national license holders are allowed to provide internet services throughout the country, some are local ISPs authorized to provide local/provincial services only.

Including the four mobile (3G/GMS) operators providing mobile based GPRS services throughout their coverage areas, some of the major ISPs providing internet services in major cities include Neda-Telecom, Insta-Telecom, Rana Technologies, IO Global, Ceretechs, New Dunia, Multinet, Netzone, Asix and Afghan Cyber. Services provided by most of these ISPs include satellite-based VSAT solutions, microware, Wi-Fi, dial-up and a couple of them also provide Wi-Max.

The state owned Afghan-Telecom has a unique and competitive advantage by having at its disposal most of the state owned telecom infrastructure and services, including more than 3,000 km of operational fibre-optic backbone. Thus, it is quickly emerging as the largest national ISP in the country, providing wholesale and retail internet services to most of the government agencies, banks, academic institutions, some ISPs and end users. Services provided by Afghan-Telecom range from high speed fiber based (STM 1-4 and SDH) connections to wireless microwave, Wi-Max, Wi-Fi, PDSN/CDMA, and its most popular low-priced dialup and DSL services provided through its reseller Insta Telecom.

In recent years, internet prices have continuously declined which is mainly due to dense competition in the data services market and the emergence of Afghan-Telecom as a major ISP providing cheaper internet services by importing international internet traffic through its national fibre-optic backbone. But due to the lack of a country-wide open and reliable physical infrastructure and the reliance of the majority of the ISPs on the expensive satellite based communications, prices for high speed and reliable internet connectivity still remains high.

However, in an attempt to improve the general quality of existing voice and data services as well as to append more value-added services, especially mobile-based high speed data communications, the MCIT has decided to issue 3G and Wi-Max licenses to the existing GSM operators and ISPs. As a result of this decision the Ministry of Communication and Information Technology (MoCIT) has so far issued three 3G licenses to Etisalat, MTN and Roshan as well as Wi-Max licenses to 2 local ISPs (Neda and IO-Global).

Despite the phenomenal growth and progress of its telecom sector, Afghanistan still remains a mainly consumer country for most of these technologies and services, while the fluctuating security status and the ongoing insurgency are the biggest hurdles for the provision of universal access to these services in the country. Additionally, lack of sustainable electrification, low quality of service, lack of sufficient local content and applications, lack of qualified local workforce, and lack of a comprehensive consumer-oriented legal and regulatory framework are challenges that still exist and need to be addressed.

Cite this article as: J. Hamdard, “The State of Telecoms and Internet in Afghanistan at a Glance”, Discourse, PSN: A0013, Aug 2013.

Sources: MCIT (ATRA, DG-IT, DG-Planning and Policy, Afghan-Telecom), GSM Operators, ISPs and Independent Research by the Author (The indicators shown are as of March 2013).
– Due to the unavailability of accurate official census information, the total population figure used by MCIT is estimated at
27.11 million whereas this figure is believed to be higher at 29.8 million in which case the indicators shown would be lower.
Jun 19, 2014Javid Hamdard
Sirius Programme UK launches global search for next group of talented entrepreneursHow inclusive mobile communication can be