14 Reasons To Pass Immigration Reform In 2014 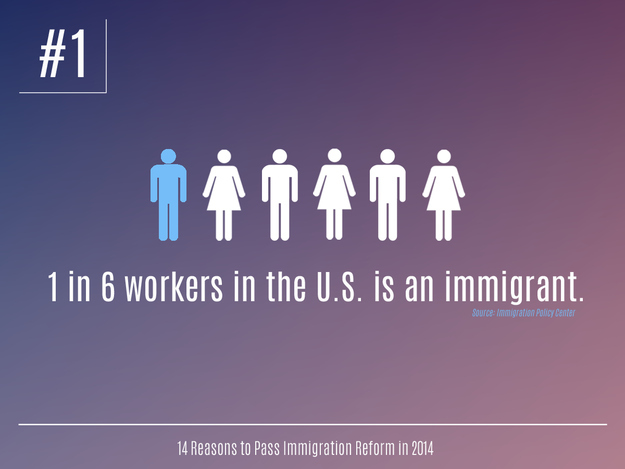 There are a lot of good reasons to make 2014 the year that we finally fix our broken immigration system.

3) Every day, the U.S. loses around $36 million in tax revenue due to inaction on immigration reform.

4) Immigration reform would provide a pathway to citizenship for 11 million undocumented immigrants.

6) Immigration reform would reduce the federal deficit by $897 billion dollars over 20 years.

8) 2.1 million DREAMers would be allowed to contribute more fully to the economy and their communities.

9) By being allowed to earn citizenship, DREAMers would add $329 billion dollars to our economy.

10) Americans across the political spectrum – and even most members of Congress – agree that the immigration system is broken and needs to be overhauled.

Source: Center for the Study of Immigrant Integration

12) The immigration system has not been significantly reformed or updated since the Reagan administration – before most DREAMers were born.

13) Immigrant-owned businesses are employing millions of workers: One in every 10 workers in this country employed at a privately owned business is employed by a business owned by an immigrant.