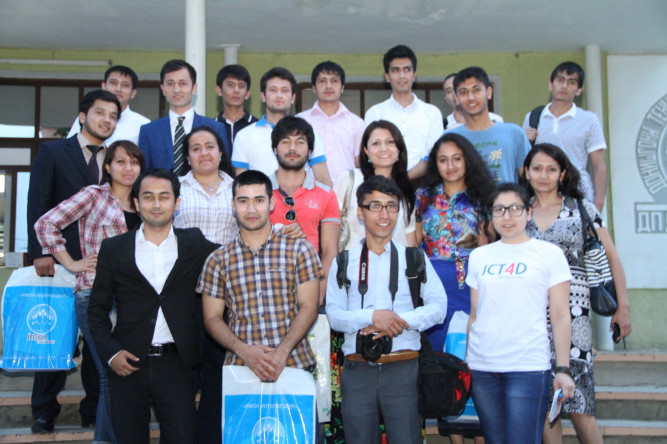 On June 6 in the hall of the Polytechnic Institute of Tajik Technical University in Khujand was held the meeting of young professionals in different spheres of information and communication technologies, local vendors, startups, programmers and fans of technology sphere. Initiative of Informational and educational electronic magazine ICT4D was supported by MDO “IMON INTERNATIONAL”.

It should be noted that “IMON INTERNATIONAL” during many years has been supporting the youth that keeps up with the times and initiatives with innovations. The event aimed to create a platform for young programmers, designers, and managers who are interested in developing their capacity, as well as developers of projects and new ideas for solving social and economic problems.

During the meeting participants were presented few ideas, as well as finished and active projects. In short, to present their projects and products, participants were well-prepared. Therefore the event was very colorful and interesting. Indeed, thanks to the speakers- presenters:

Firdavs Yormatov – head of Web-studio Doodle.Tj, Shahnoza Muhamadieva-entrepreneur starting new business, «That’sTajik» project manager -platform for the purchase and implementation of handicrafts, Jafar Urunov- the founder of the online dictionary sahifa.tj and Rahmatjon Hakimov – the head of internet project math.tj – which is aimed at solving math problems in algebra for pupils of secondary schools. It was really funny.

At the end of the event on the part of the main partner of this meeting MDO “IMON INTERNATIONAL” Aziza Pulatova made a speech. Aziza expressed her gratitude and commitment to all participants who presented their works and projects, also she shared information about funding on the part of “IMON INTERNATIONAL” of business-ideas, offering job to young, ambitious specialists and innovators. Then the representative of the Information-educational e-magazine ICT4D Sukhrob Niyazov made a speech and thanked all attendants to the active involvement. “IMON INTERNATIONAL” provided some gifts for their contribution in the development of information-communication technologies in the country.