Home 2014 May Ikromjon Hotamov: “PLAYMARKET – The platform for the development of educated and civilized country”

Ikromjon Hotamov: “PLAYMARKET – The platform for the development of educated and civilized country”

University courses are not enough in order to be a programmer; one must study and improve skills constantly.

Today we decided to tell about the young app and program developer, 4th year student of the Faculty of Information Technology of PITTU, who received scholarship named after Mendeleev, scholarship of Chairman of Sughd region and recently took the second place in the Republican Olympiad in Informatics, Ikromjon Hotamov.

Ikromjon, tell me why you decided to develop mobile applications? How did it all begin?

Beginning from school years I was fond of information technology. I’ve always been attracted to this new, unknown world to me, constantly wanted to learn about it more and more. This desire led me to the doors of the University of PITTU. I began to create small computer games instead of my midterms to develop my programming skills. The first game I created called «StudLife», i.e. the student’s life.

The goal of the game is to successfully complete university, have regular income, maintain a healthy lifestyle and have time to prepare for exams. Actions of the character changed accordingly his physical, financial and moral condition. In general the game was created on the basis of my life observations. I created it based on VB.net. This game was made to “get the hand” and develop.

And what are the results? 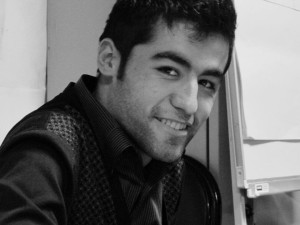 Nowadays most people prefer phones on the Android platform, because it allows use a great number of various applications. Based on these observations, I decided to develop applications for this platform.

During the first week after announcing of the application it has been downloaded 500 times, the number of downloads is 3750 now and each day are added to the average – 150 downloads, that made me happy.

Number of active Android users is increasing in Tajikistan, but there was no application in Tajik language. The fact that there is an audience of users of this kind of applications, gives impetus to young developers to work on self-improvement and create more applications that provide comfort in different areas of users’ activity.

Also, after the publication of the application, I have developed other applications; currently in PlayMarket in addition to the “Constitution of the republic of Tajikistan” you can download the “Labour Code”. I believe that users will find this application necessary and useful.

Is app developing difficult? Where did you learn it?

Not difficult if person has desire, you can achieve the goal in different ways. I had no difficulty, because I am full of desire to learn everything and it’s very interesting.

University courses are not enough in order to be a programmer; one must study and improve skills constantly.

My university gave me the impetus for the development. It is university that woke my interest to this field.

What other apps have you developed?

Unfortunately, most of the young owners of “cool” phones use them only for entertainment and communication. I would like to see the future of our country more educated and cultured, so I started to develop an interesting and affordable application – “Ashori Loiq Sherali”. I decided to collect poems of our famous countryman and brilliant poet Loiq Sherali in one convenient app. There 550 poems of Loiq Sherali are collected in it. The application operates on the search engine by names of poems and alphabetically. Also, it is possible to “like” verses, and “liked” verses are placed in the tab “Sherhoi Dilpisand”. “Gulistoni Saadi” was designed just like this application.

In addition to these applications, I’m working on several commercial apps now and I’m sure you will find out about them later =)

What advice would you give to those who want to develop mobile applications?

If person has chosen this path, I think he doesn’t need advice because the person moves around his desire; desire to constantly improve and learn to get better. Those who are still undecided with their idea, I want to repeat that some subjects taught in universities are not enough to become good professional. Most valuable skills and knowledge are acquired in practice.