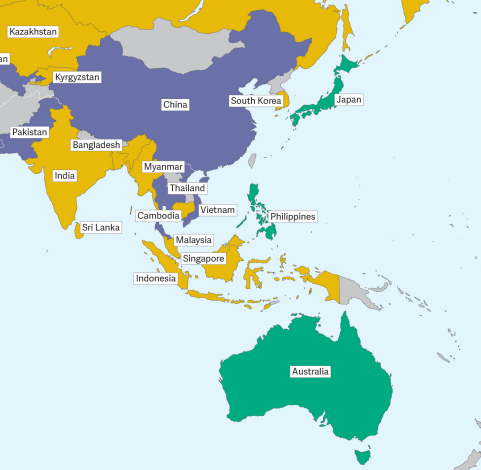 The only countries in Asia Pacific reckoned to have a genuinely free internet, without restrictions on access or content, are Australia, Japan and the Philippines, according to an annual study by Freedom House.

China has the least free internet in the region, although North Korea and Laos – neither famed for internet freedom – were not measured in the study. Neither was New Zealand, which is one of the region’s freest democracies where press freedom is among the highest in the world.

More of the region’s countries were adjudged not to have a free internet than do, including – in descending order of internet freedom – Thailand, Pakistan, Vietnam and China.

The majority of APAC countries were reckoned to have a partially free internet, the highest ranked in that group being South Korea followed by Singapore, India and Indonesia.

The report reads that while internet freedom has fallen globally this year, the NSA surveillance revelations leaked by whistleblower Edward Snowden have resulted in people “taking matters into their own hands” in securing
their privacy and freedom of expression online.

“In more authoritarian settings, and in democracies where needed reforms are still pending, individuals and companies have taken matters of privacy and freedom of expression into their own hands by using anonymizing and encryption tools,” the report reads.

“Products that emphasize user privacy have logged a notable increase in users since June 2013. On the anniversary of the NSA revelations, civil society campaigns placed an emphasis on educating users about available privacy tools.”

“And internet companies that initially came under fire for cooperating with intelligence agencies or not adequately protecting user data have since taken steps to improve their encryption standards,” the report reads.

Threats against internet freedom to emerge this year included pressure on independent news websites, many of which must now get a licence to publish, legislation to clamp down on free speech online, and arrests and detentions made of people deemed to be political or social dissidents.